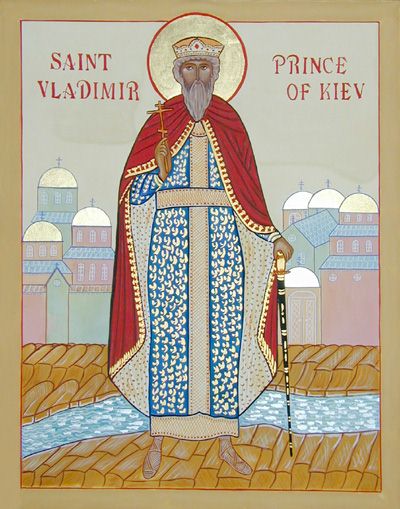 Saint Vladimir (Svyatoslavich), Baptizer of Russia (958-1015) was the Grand Prince of Kiev.

St. Vladimir was a devout pagan in his early life. He was a great conqueror, who had many wives, and erected many pagan statues in the lands that he ruled over.

Upon finding out that other faiths existed beyond his own paganism, he decided to send his envoys out into the world to find out what was true faith on earth.

His envoys met with Muslims, but felt that there was no joy among them, and that their faith was very mechanical. The envoys also met with Jews and Catholics, but were still unimpressed.

Everything, however, changed when St. Vladimir’s envoys arrived in Constantinople. Upon attending Divine Liturgy in the Hagia Sophia, the envoys said “We no longer knew whether we were in heaven or on earth”. Taking the word of his envoys, St. Vladimir had himself and his nation baptized Orthodox.

St. Vladimir changed completely after his baptism. He destroyed all the pagan statues that stood in Russia, and replaced them with Churches. He also attempted to live in peace as much as possible with his neighbors, and had only one wife.

Sitting in the throne of the God-protected Kiev,
thou wast like a merchant seeking goodly pearls, O Vladimir.
Thou didst search and send to the Imperial City
to know the Orthodox Faith.
Thou didst find Christ the Pearl of great price,
Who chose thee like Paul and enlightened thy blindness of flesh and spirit at the Font.
Thy people celebrate thy repose:
wherefore pray for Russia and all peoples,
that the Orthodox may be granted peace and great mercy.

This icon from the church’s iconostasis was hand-painted by Fr. Luke (now dwelling the Hermitage of the Annunciation) according to traditional methods.